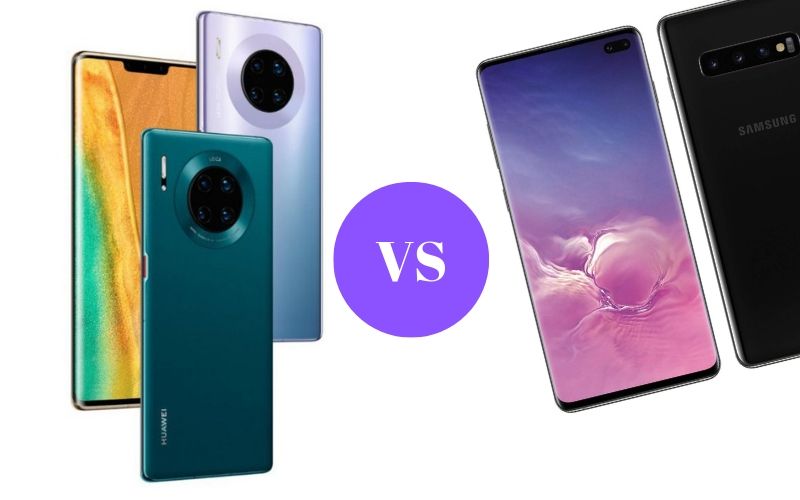 Two similar, latest phone models: Huawei Mate 30 Pro and Samsung Galaxy S10 + - what connects them, what is the difference, which is better?

With the all-new 40 MP camera that takes great photos in daylight and low-light night conditions, and a zoom lens that can perform up to 10x zoom without sacrificing quality, the P30 Pro is the perfect choice for photography fans. The P30 Pro also has a vivid display supported by the highest performance and two-day battery life (4200 mAh) with fast 40 W charging.

Samsung has once again done a fantastic designer job, using the Infinity-O cutout on the front, which significantly reduced the frame. Performance is at the level that Android currently offers, but what makes the S10 + stand out is the Dynamic AMOLED display. This is without a doubt the best screen you'll find today on any phone.

Both Huawei and Samsung have done a fantastic job designing their flagship. The P30 Pro maintains a gradient pattern from last year, adding new housing color options. The front has a small water-drop notch for the camera, and the handset is now built into the display, just like Vivo and LG do.

Meanwhile, Samsung has set the standard for industrial design over the years, and the Infinity-O cutout in S10 + is an innovative way to eliminate frames. The design of the back has not changed much in recent generations, but new colors give it extra elegance.

The P30 Pro has a 6.47-inch OLED display with curved edges, and although the panel is alive, it loses with the Galaxy S10 +. It offers the best display you'll find on any phone today. The Dynamic AMOLED panel is gorgeous, it has excellent levels of contrast and saturated colors.

For other functions, both phones offer wireless charging as well as reverse wireless charging. Last year, Huawei initiated the reverse wireless charging trend, and Samsung followed in its footsteps with the S10 +. Both also have large batteries, with the P30 Pro equipped with a 4200 mAh unit and S10 + with a 4100 mAh battery. Although the battery capacity is almost the same in both devices, the P30 Pro offers significantly better battery life thanks to its lower resolution FHD + panel and aggressive EMUI memory management. And when you need to top up your smartphone, the Huawei 40 W charger is much faster than the 15 W solution used in Samsung.

Both phones also have IP68 dust and water resistance, and the S10 + also retains a 3.5mm jack, making it one of the few flagships that still do it.

Both P30 Pro and Galaxy S10 + have five cameras - Huawei has four cameras at the back and one at the front, while Samsung offers three at the back and two at the front. Both phones have wide-angle and zoom lenses on the back. However, further comparisons are the triumph of the P30 Pro. The phone has a zoom lens up to 10 times magnification without noticeable loss of quality. This zoom level on the phone is unbelievable, and Huawei did an excellent job of placing the lens in such a narrow frame.

No matter which phone you choose, you'll get amazing photos.

The P30 Pro has a 32 MP camera on the front, while the S10 + has 10 MP and 8 MP configurations, and the additional sensor doubles like a wide-angle lens. The P30 Pro takes great photos in daylight, and the f / 1.6 lens works great even in low-light conditions.

EMUI has come a long way in the last two years, and Huawei has made significant changes in making this overlay more user-friendly for Western users. Samsung has significantly refreshed the interface with One UI, offering a more modern look with mostly white and blue colors, like Google.

Both phones come with a stunning range of customization options. The user interface is smooth and free of delays on both devices, but this is to be expected given the quality of the equipment offered.

However, there are a few minor problems. EMUI still doesn't seem to be consistent because it has elements from older versions.

Both the P30 Pro and the Galaxy S10 + are shipped with Android 9.0 Pie, and history indicates that both will slowly receive software updates. Huawei has been doing better in this area over the past 12 months.

Both of these phones are really top quality and really both are worth the price. That is why choosing a winner is not easy as usual. They take great photos, but if you care about uniqueness in this respect, go for Huawei.